The award for “The most transparent locality in the Republic of Moldova” has reached Balti. Veaceslav Ioniță: We want to see you a champion of change! 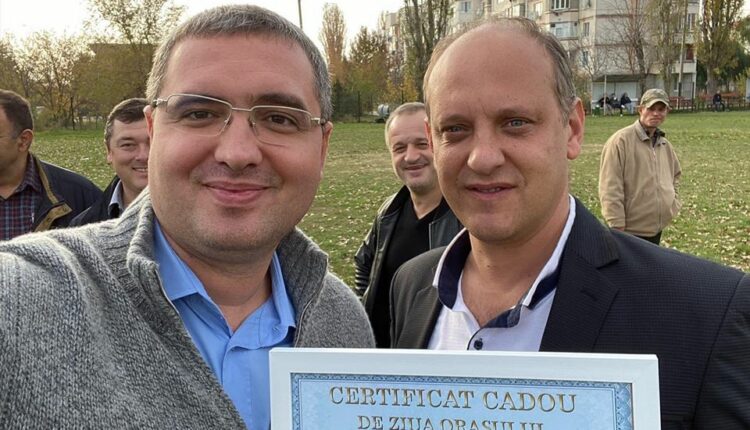 In fact, it is for the first time when the award is raised directly by the head of the administration from Bălți, Renato Usatii, although the City Hall receives it since coming to the helm of the municipality, and the registered performance index is due to this fact. “I am glad to see you in the City Hall of Balti, because during all the years we were honored by the organization you represent, we had to face searches, criminal cases. Personally, I am participating in such an event for the first time, because I happen to be, at least, in international search. I am happy with the results we have obtained, but now I am interested in discussing the report, in order to understand where we still have work to do, so that we not only maintain this result, but improve it, work with officials people can benefit from the best services “, said in his turn the mayor of Balti municipality, Renato Usatii. IDIS “Viitorul” experts together with those of INECO, Slovakia have prepared some recommendations for Balti City Hall, mentioning that they are made only in the case of the best ones. “We have prepared for you some specialized recommendations. Our colleagues do not do them for all the mayoralties, they did them for the Balti City Hall because we see you champions in everything that means changes in Moldova. We give you the recommendations in writing and we want everyone to understand that they are made only for the one who is the best ”, mentioned Veaceslav Ioniță. Therefore, among other things, experts recommend the publication of CVs of heads of municipal enterprises, so that people know who is in charge. At the same time, it is required to offer at least ten days for the analysis of some topics submitted by the City Hall for public debates. “We will definitely do this, especially since it is not difficult,” said Mayor Renato Usatii. At the same time, the mayor listed some of the problems faced by local public authorities and especially the mayor’s office, many of which are caused by gaps in national legislation. In this regard, Usatii expressed his desire to discuss the subject with IDIS “Viitorul” experts and those of INECO, Slovakia, in order to identify solutions. According to the mayor, imperfect laws are an obstacle to the realization of certain projects through public tenders. The works are delayed because the economic agents can afford not to present themselves in reasonable terms or because some of them provide low-quality services. “Some people say that I have to choose the companies I know and invite them, but that would mean imitating an auction, which is not fair at all. We want to collaborate and talk with experts from IDIS “Viitorul” because we often encounter difficulties, namely due to imperfections in national legislation, “said the mayor. At the same time, Usatii says that due to the stubbornness of the central authorities to allow mayors to increase the salaries of civil servants, many of them leave, and the institution ends up facing a staff crisis. “A lawyer in Bălți City Hall has a salary of 5,000 lei, one from Customs has 10,000 lei, and another from FISC – 15,000 lei. The problem is that the central authorities do not allow us to increase the salaries of civil servants. If we saved some money and had the opportunity as mayors to increase salaries, we would do so “, added the mayor. The economic policy expert of IDIS “Viitorul”, Veaceslav Ioniţă stated that he will pass on to his colleagues the topics pointed out by the mayor and mentioned that despite this problem, this year all the mayoralties in terms of human resources have dropped significantly and only Bălți City Hall exception. According to the expert, the decline is explained by the fact that the specialists of the organization he represents have introduced much tougher requirements this year. “I agree with this, because it will help us become better. Otherwise, we are like a child who after five classes at a school in the village, comes to Chisinau or goes abroad and from the fifth grade returns to the first grade. Therefore, I believe that the requirements must be the same as for the mayoralties in European cities, because in this case, there will be maybe only five mayoralties left, but they will be the best and on their basis the whole country can be built. ” , concluded Renato Usatii. We mention that Bălți municipality maintains its leading position in terms of transparency for the fourth year in a row, in 2020 accumulating 76 percentage points to the nine transparency criteria considered in the study, being about access to information, participation in the decision-making process , the budget process, the organization and conduct of public procurement, public property management, conflict of interest, human resources, social services and investments of local authorities in 2019. The same research shows that Balti is the only locality in the country that published all ads on the Internet. award for 2019, public procurement contracts and the local strategic plan for anti-corruption and integrity actions. Things changed cardinally in Balti in 2015, with the election of Renato Usatii as mayor: during his activity, the city rose in the transparency rating from 7th place to first position.

Going out in parks, also allowed in Bălți; Usatii: The state of emergency was imposed to postpone the early elections